Virtual coffee talk In her essay, “The Nature and Aim of Fiction,” Flannery O’Connor says, “People without hope not only don’t write novels, but what is more to the point, they

In her essay, “The Nature and Aim of Fiction,” Flannery O’Connor says, “People without hope not only don’t write novels, but what is more to the point, they don’t read them. They don’t take long looks at anything, because they lack the courage. The way to despair is to refuse to have any kind of experience, and the novel, of course, is a way to have experience.”

Leaders, of all people, must be people of hope and courage. Those virtues are developed by, among other things, developing what Edmund Burke and others have called the moral imagination. Fiction is fodder for that imagination. The Leader that does not read literature—more specifically, stories—has a malnourished imagination and is weaker for it.

So let me persuade you to lay aside your dog-eared Good to Great or Seven Habits—yes even the latest Simon Sinek—for just a while, and sink your head and heart deep into a good story. Perhaps we’ll begin with Macbeth. 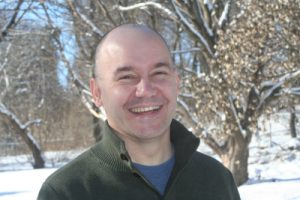 Dan Daugherty and his family have lived in both the southernmost and northernmost states in the contiguous 48. They’ve found Muncie to be a pleasant medium. He taught literature, composition, and philosophy at private high school in Minnesota for 12 years. He currently serves as the Director of Education for Muncie Fellows and the Executive Director of Alcuin Study Center. He holds a BS in Journalism from BSU and an MA in Christian Thought from Reformed Theological Seminary in Orlando. He loves spending time with his wife of 25 years, his two boys (ages 19 and 14), and Watson, his dog. He’s also quite keen on reading literature, listening to and playing music, camping and hiking, hanging out with friends (preferably over a good craft beer), and playing with words on a page.