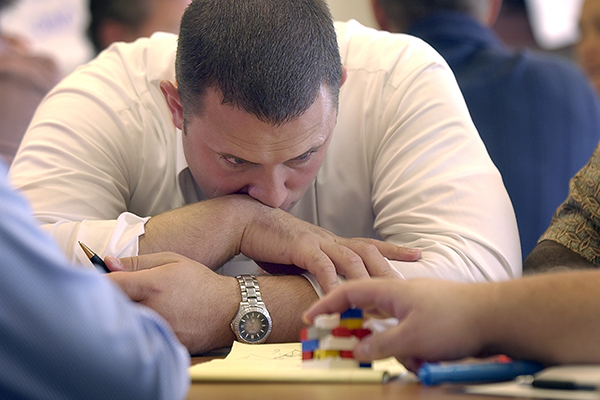 Chad Shelley’s son was three years old when he was diagnosed with autism. Chad says he had previously been in a state of denial. His son’s behavior had been difficult to handle, but he had convinced himself it was just a phase.

The diagnosis came just a week before Chad attended Emergence in the fall of 2009. He frankly wasn’t very interested in attending. As it would take time away from his work at First Merchants Bank, and it was especially difficult to be away from his family. Despite all of that, he went, having no idea the incredible impact the class would have on his life. The program challenged Chad to find his passion and determine where it intersected with needs in the community. Wondering if there was an organization that worked with autism that he could look into, a classmate connected him with Interlock.

Chad participated in Interlock’s annual fundraising walk and began attending monthly support group meetings. He showed a keen interest in the organization’s funding model and programming. It only took a few months after joining the board that consisted of parents, professors and therapists, Chad began to see how his skill set matched a previously unfulfilled need. He introduced and developed a golf outing as an additional fundraising event. He also began to organize activities for families with autistic children that are sensitive to their behavioral needs, like sporting events and swim nights.

A lot of times we don’t think we can make a big difference. All you can do is impact where you stand in your corner of the world. If we all do that it makes a big impact.

Chad later became President of Interlock in 2012, and soon thereafter formed a partnership with The Facing Project which launched Facing Autism – the booklet that includes a listing of community resources and featured stories told by parents of children with autism just like him.