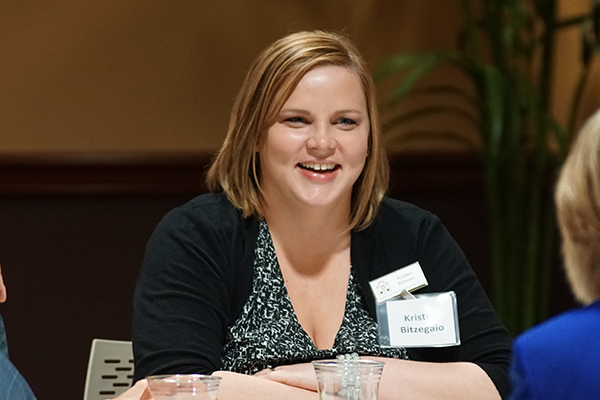 Kristen Bitzegaio thought she was going to be a magazine editor until one day, while working on the WIPB-TV newsletter, she opened up to her boss about how discontent she was as a student in the Ball State journalism department. Her boss sat her down and told her she could do so much more. WIPB had exposed Kristen to too much of the great work local service organizations were doing for her to resist the call of nonprofit work.

Just after completing her undergraduate degree, Kristen joined Muncie Young Professionals and learned that some of the leaders of the group had been through one of the first Emergence classes. She was impressed.

When you have the internal leadership drum that’s always beating it’s hard to turn anything away.

By the time she was ready to take Emergence, her drive was beginning to wane. She was pregnant with her second son and it was becoming harder to juggle the roles of community leader, student, wife and mother. Staying strong and putting herself through Emergence taught Kristen how prioritizing her lifeactually makes her a better citizen. Emergence helped Kristen understand that saying no to some things meant she could better focus on, and say yes to, her personal mission.

Her path through Shafer Leadership Academy led Kristen to accept a position as Executive Director of the Back to School Teacher’s Store in 2014. The organization provides free school supplies to local public school educators. Overseeing dozens of volunteers, leading a board, and working with community supporters, Kristen says she uses what she learned about her versatile personality style in Emergence to maintain relationships and help heal broken ones.