Muncie Daughter Calls You to Consider your Bias in the Workplace

Charlize Jamieson sat in the pews of College Avenue United Methodist Church a few months ago and heard the pastor say from the podium: “Transgender individuals are not God’s mistake; They are God’s miracle.”

“I couldn’t believe what I was hearing,” said Jamieson, who grew up and has lived 45-plus years in Muncie. “People would consider you ‘different’ based on your hair style or favorite movie, so to hear this unflinching acceptance of trans and other marginalized groups, at a church no less, I was in tears.”

Jamieson grew up as “Charles,” adopted by well-respected parents. She played sports, married a nice girl, served the church as an elder and raised two kids — a boy and a girl. Jamieson knew by 13 that she was “a girl trapped in a boy’s body,” but she distracted herself — pouring herself into her career and paying the bills as a retail management executive.

Jamieson followed a job to Chicago, but her 21-year marriage didn’t last. She remarried and had a third child, continuing to live “as society expected,” she said. Jamieson’s job began sending her a few hours away, which required her to stay in a hotel. She’d pack three suitcases: a bag of “Charles” business attire, a bag of women’s dresses, and a bag of women’s shoes and makeup.

It was such a tragic, emotional act.

“I would go into work at 7 a.m. dressed as Charles, and I would get to the hotel at 5 p.m. and get dressed as Charlize. I looked hideous but felt so natural and beautiful on the inside. I would just stare in the mirror, looking at my true self,” Jamieson said. “When I had to get up and go into work the next morning, it wasn’t difficult to wash off the makeup because I was in tears. It was such a tragic, emotional act.”

In 2013, Jamieson’s six-figure corporate job was outsourced and her father was diagnosed with pancreatic cancer. Jamieson, her wife and teenage daughter moved to Muncie to care for her father, who died a year later. Jamieson would sneak out to drag shows at The Mark, transforming into Charlize in the parking lot. “I was terrified I would be seen, and I was simply tired of living a lie and dual existence,” she said. “I loved my father too much to come out while he was alive. 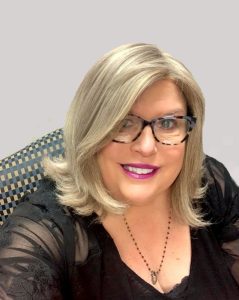 In 2016, Jamieson came out to her wife of then 17 years and teenage daughter, and they have remained by her side. Jamieson told her first wife and their two kids, who support her. Friends and acquaintances soon learned of her transition, and she changed her profile picture and name on social media.

“I expected the worst. I thought I would be rejected by everyone I loved and ridiculed by strangers, but I have lost no one of significance since coming out,” she said. “The people of Muncie, and I get emotional about this, have been supportive beyond measure. I went from thinking I would have nothing to realizing I have everything and then some.”

Jamieson has had few run-ins on social media, “I saw firsthand how Muncie takes haters down,” Jamieson said, recalling how friends and complete strangers shamed the person for the comment he posted about Jamieson. Entire businesses have come alongside Jamieson to show support, including Shafer Leadership Academy, which invited Jamieson to share her story as part of an SLA Coffee Talk titled, “The Human Library: Unpacking Bias in the Workplace.”

This presentation was a powerful and informative talk

The virtual presentation is part of a series coffee talks the Muncie nonprofit hosts for free to the public. SLA Executive Director Mitch Isaacs said he is particularly excited about this talk about bias and storytelling.

“This presentation was a powerful and informative talk about identifying and addressing our own biases in our own lives and in the workplace.,” he said. “We all interact with and influence so many people, so it’s important to hear personal stories like Charlize, one of Muncie’s own, as we learn about resources available to start these critical discussions about our fears and misunderstandings.” 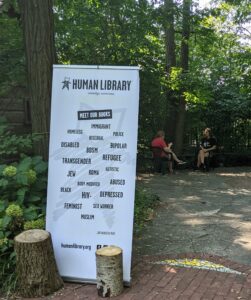 Along with her story, Jamieson introduced the concept of The Human Library, an international nonprofit that empowers people or “books” to share their story with others as a way of creating more inclusive and cohesive communities across cultural, religious, social and ethnic differences.

Jamieson publishes as a Human Library book title “Transgender,” with others titled ADHD, young mother, sexually abused, refugee, soldier, alcoholic, naturist, polyamorous and autism, for example. “During a Human Library event, you are ‘on loan’ to answer questions from an in-person and/or online audience to reduce the prejudice and biases that people may possess,” Jamieson said.

“We share the Human Library with corporations, libraries, universities, and other organizations, as well as individuals, to inspire and educate people about the need for and positive outcomes that emerge from an embrace of diversity and inclusion,” she said. “No two readings are the same, as these brave and courageous open books adapt to the needs of the audience. Readings are truly life-changing.”

Previous Post
How Dustin Humm, owner of eKeeper Systems, has achieved a “higher degree of sanity” by working with Shafer
Next Post
From Checkers to Chess: SLA challenges leaders through personalized, relevant programs